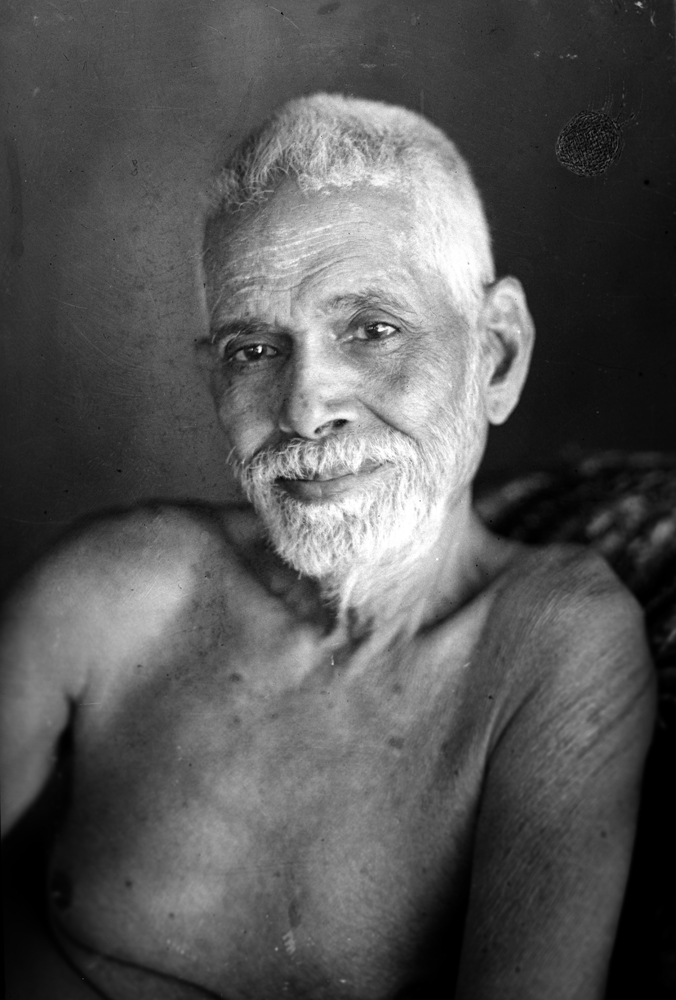 Ramana Maharshi /rəˈmʌnə məˈhʌrʃi/ (30 December 1879 – 14 April 1950) was an Indian Hindu sage and jivanmukta (liberated being). He was born Venkataraman Iyer, but is mostly known by the name Bhagavan Sri Ramana Maharshi.

He was born in Tiruchuli, Tamil Nadu, India. In 1895, an attraction to the sacred hill Arunachala and the 63 Nayanmars was aroused in him, and in 1896, at the age of 16, he had a “death-experience” where he became aware of a “current” or “force” (avesam) which he recognized as his true “I” or “self”, and which he later identified with “the personal God, or Iswara”, that is, Shiva.

This resulted in a state that he later described as “the state of mind of Iswara or the jnani”. Six weeks later he left his uncle’s home in Madurai, and journeyed to the holy mountain Arunachala, in Tiruvannamalai, where he took on the role of a sannyasin (though not formally initiated), and remained for the rest of his life.

He attracted devotees that regarded him as an avatar and came to him for darshan (“the sight of God”). In later years an ashram grew up around him, where visitors received upadesa (“spiritual instruction”) by sitting silently in his company asking questions. Since the 1930s his teachings have been popularized in the West, resulting in his worldwide recognition as an enlightened being.

Ramana Maharshi approved a number of paths and practices, but recommended self-enquiry as the principal means to remove ignorance and abide in Self-awareness, together with bhakti (devotion) or surrender to the Self.

Ramana Maharshi was born Venkataraman Iyer on 30 December 1879 in the village Tiruchuzhi near Aruppukkottai, Virudhunagar District in Tamil Nadu, South India. He was the second of four children in an orthodox Hindu Brahmin family.

His father was a court pleader. Both a paternal uncle of his father and his father’s brother had become sannyasins. Venkataraman’s family belonged to the Smarta denomination, and regularly worshiped Lord Siva, Lord Vishnu, Lord Ganesa, Lord Surya and Goddess Shakti in their home.

When Venkataraman was seven he had his upanayana, the traditional initiation of the three upper varnas into Brahmanical learning and the knowledge of Self. He had a very good memory, and was able to recall information after hearing it once, an ability he used to memorize Tamil poems. Narasimha notes that Venkataraman used to sleep very deeply, not waking from loud sounds, nor even when his body was beaten by others.

When he was about twelve years old, he may have experienced spontaneous deep meditative states. Sri Ramana Vijayam, the Tamil biography that first appeared in the 1920s, describes a period a few years before the death-experience in Madurai: Some incomplete practice from a past birth was clinging to me.

I would be putting attention solely within, forgetting the body. Sometimes I would be sitting in one place, but when I regained normal consciousness and got up, I would notice that I was lying down in a different narrow space [to the one where I had first sat down].

When he was about eleven his father sent him to live with his paternal uncle Subbaiyar in Dindigul as he wanted his sons to be educated in the English language, so that they would be eligible to enter government service. Only Tamil was taught at the village school in Tiruchuzhi, which he attended for three years.

In 1891, when his uncle was transferred to Madurai, Venkataraman and his elder brother Nagaswami moved with him.

In Dindigul, Venkataraman attended a Hindu School where English was taught, and stayed there for a year. His father, Sundaram Iyer, died suddenly on 18 February 1892. After his father’s death, the family split up; Venkataraman and Nagaswami stayed with Subbaiyar in Madurai.

Venkataraman first attended Scott’s Middle School and then the American Mission High School where he became acquainted with Christianity. In November 1895 Venkataraman realized that Arunachala, the sacred mountain, was a real place by reading Tamil version of the very famous Kannada epic poem Prabhulingaleele by 15th-century Virashaiva poet Chamarasa and the very famous character in the poem the philosopher and great poet of the 12th-century Allama Prabhu.

Recently, Dr. Prasanna Santhekadur’s book, Ettana Allama Ettana Ramana? (Allama Prabhu and Ramana Maharshi, how are they related?) clearly shows the major influence of Allama Prabhu on Ramana Maharshi. He had known of its existence from an early age, and was overwhelmed by the realisation that it really existed. During this time he also read Sekkizhar’s Periyapuranam, a book that describes the lives of the 63 Nayanmars, which “made a great impression” on him, and revealed to him that “Divine Union” is possible. According to Osborne, a new current of awareness started to awaken during his visits to the Meenakshi Temple at Madurai, “a state of blissful consciousness transcending both the physical and mental plane and yet compatible with full use of the physical and mental faculties”. But Ramana Maharshi later stated that he remained uninterested in religion or spirituality until his awakening eight months later.

According to Narasimha, in July 1896, at age 16, he had a sudden fear of death. He was struck by “a flash of excitement” or “heat”, like some avesam, a “current” or “force” that seemed to possess him, while his body became rigid. He initiated a process of self-enquiry, asking himself, “what it is that dies?” He concluded the body dies, but this “current” or “force” remains alive, and recognized this “current” or “force” as his Self, which he later identified with “the personal God, or Iswara”. In one of his rare written comments on this process Ramana Maharshi wrote, “inquiring within Who is the seer? I saw the seer disappear leaving That alone which stands forever.

No thought arose to say I saw. How then could the thought arise to say I did not see.” Later in life, he called his death experience akrama mukti, “sudden liberation”, as opposed to the krama mukti, “gradual liberation” as in the Vedanta path of jnana yoga. It resulted in a state of mind which he later described as “the state of mind of Iswara or the jnani:” After reading the language of the sacred books, I see it may be termed suddha manas [pure mind], akhandakara vritti [unbroken experience], prajna [true knowledge] etc.; that is, the state of mind of Iswara or the jnani." After this event, he lost interest in school studies, friends, and relations. He was absent-minded at school, “imagining and expecting God would suddenly drop down from Heaven before me”. Avoiding company, he preferred to sit alone, absorbed in concentration on this current or force, and went daily to the Meenakshi Temple, ecstatically devoted to the images of the 63 Nayanmars and of Nataraja, wanting “the same grace as was shown to those saints”, praying that he “should have the same bhakti that they had” and “[weeping] that God should give me the same grace He gave to those saints”. Knowing his family would not permit him to become a sanyassin and leave home, Venkataraman slipped away, telling his brother he needed to attend a special class at school. Venkataraman boarded the train on 29 August 1896 and reached Tiruvannamalai on 1 September 1896 where he remained for the rest of his life.

Be as you are - Sri Ramana Maharshi