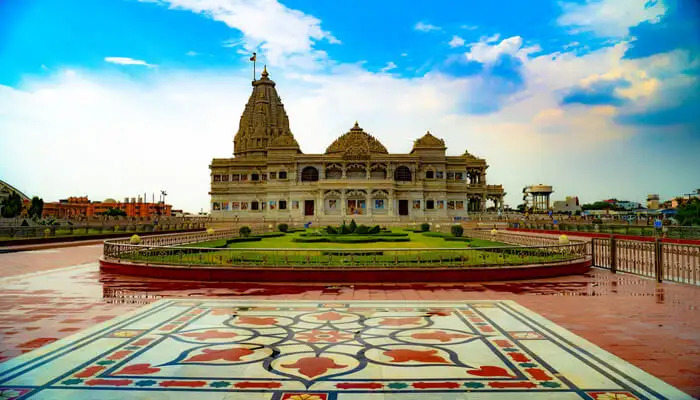 In Hinduism, Mathura is birthplace of Krishna, which is located at the Krishna Janmasthan Temple Complex.

It is one of the Sapta Puri, the seven cities considered holy by Hindus. The Kesava Deo Temple was built in ancient times on the site of Krishna’s birthplace (an underground prison). Mathura was the capital of the kingdom of Surasena, ruled by Kansa, the maternal uncle of Krishna. Janmashtami is grandly celebrated in Mathura every year.

Mathura, located in the cultural region of Braj, has an ancient history and is also thought to be the birthplace and homeland of Krishna, who belonged to the Yadu dynasty. The city is mentioned in the oldest Indian epic, the Ramayana, according to an Archaeological Survey of India plaque at the Mathura Museum. In the epic, the Ikshwaku prince Shatrughna defeats the demon Lavanasura and takes possession of the land. Because it was densely forested, the area became known as Madhuvan, then Madhupura, and finally Mathura. Katra (‘marketplace’), now known as Krishna Janmasthan (’the birthplace of Krishna,’ was the most important pilgrimage site in Mathura.