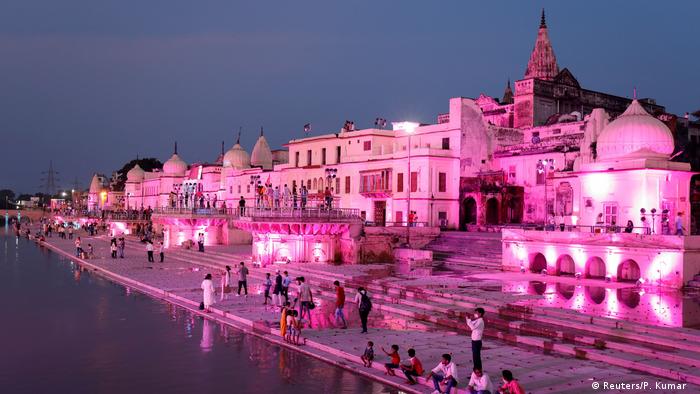 Ayodhya, also known as Oudh or Awadh, is a town in the northern Indian state of Uttar Pradesh. It is located just east of Faizabad on the Ghaghara River.

Ayodhya is regarded as one of the Hindus’ seven sacred cities, revered for its association in the great Indian epic poem Ramayana with the birth of Rama and the rule of his father, Dasharatha. According to this source, the town was prosperous, fortified, and had a sizable population.

Ayodhya was the early capital of the kingdom of Kosala in traditional history, but in Buddhist times (6th–5th century BCE), Shravasti became the kingdom’s chief city. Scholars generally agree that Ayodhya is the same as Saketa, the town where the Buddha is said to have lived for a time. The Chinese Buddhist monk Faxian stated in the 5th century CE that there were 100 monasteries there, indicating its later importance as a Buddhist center (although he cited 100, Faxian probably did not mean that exact number, just that there were many monasteries). There were also several other monuments, including a stupa (shrine) said to have been built by the Mauryan emperor Ashoka (3rd century BCE).

During the 11th and 12th centuries CE, the Kanauj kingdom arose in Ayodhya, then known as Oudh. Later, the region was incorporated into the Delhi Sultanate, the Jaunpur kingdom, and, in the 16th century, the Mughal Empire. Early in the 18th century, Oudh gained some independence before succumbing to the British East India Company in 1764. The British annexed it in 1856; the annexation and subsequent loss of rights by hereditary land revenue receivers was one of the causes of the 1857 Indian Mutiny. In 1877, Oudh was united with the Agra Presidency to form the North-Western Provinces, which later became the United Provinces of Agra and Oudh, which is now Uttar Pradesh state.

Despite the town’s long history, there are few antiquity monuments still standing. The Mughal emperor Bbur built the Babri Masjid (“Mosque of Bbur”) in the early 16th century on a site traditionally identified as Rama’s birthplace and the location of an ancient Hindu temple, the Ram Janmabhoomi. Because of its importance to both Hindus and Muslims, the site was frequently a source of contention.