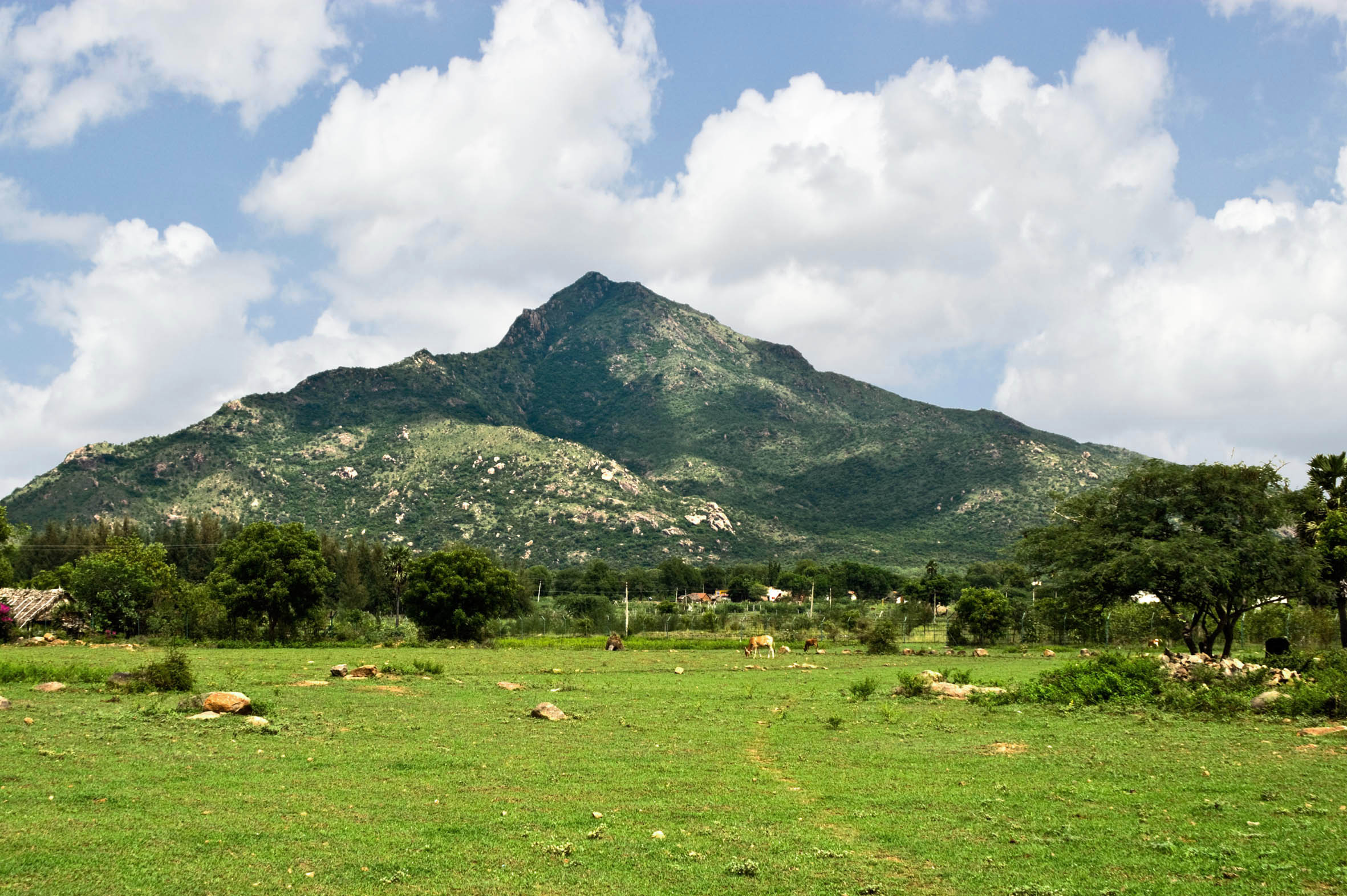 Arunachala (IAST: Aruṇācalam [əɾʊˈɳaːtʃələ], “Red Mountain”) is a hill in Tiruvannamalai, Tamil Nadu, and one of the five main Shaiva holy places in South India.

The Arunachalesvara Temple to Shiva is located at the base of the hill. The hill is also known by the names Annamalai, Arunagiri, Arunachalam, Arunai, Sonagiri, and Sonachalam.

Every year in the Tamil month of Kārttikai (November–December), the Kārttikai tīpam light is lit atop the hill.

It is also an important place for devotees of Ramana Maharshi, with Sri Ramana Ashram situated at its foothills.

Arunachala was dubbed the spiritual Heart of the World by the Maharshi. Aruna, which means’red, dazzling like fire,’ does not refer to a simple heat-producing fire. It actually refers to Jnanagni, the Wisdom Fire, which is neither hot nor cold. The word achala means “hill.” As a result, Arunachala signifies ‘Wisdom Hill.’

There is a Puranic legend concerning the hill’s genesis. Vishnu and Brahma got into a fight over who was the greatest.

Because their rivalry had caused havoc on Earth, the Devas approached Siva and pleaded with him to resolve the conflict. Siva then appeared as a column of light, from which a voice proclaimed that whomever could find the upper or lower end was the greatest.

Vishnu assumed the form of a boar and burrowed down into the earth to locate the bottom, while Brahma took the form of a swan and flew upwards to find the top.

Vishnu was unable to reach the base of the column, but “began to perceive within himself the Supreme Light which dwells in the souls of all, he became lost in meditation, oblivious to the physical body and even forgetful of himself, the one who sought,” according to the story. Brahma noticed an alse plant flower falling in the air and, thinking he might win by trickery, returned with it and claimed he had picked it from the summit.

“You are Self-knowledge,” Vishnu confessed, turning to the Lord in worship and prayer. OM is who you are. Everything revolves around you, and you are the beginning, middle, and end of it all. You are everything and illuminate everything." He was pronounced great while Brahma was exposed and confessed his fault.

Vishnu is the intellect, Brahma is the ego, and Siva is Atma, the spirit, according to this mythology.

Because the lingam or column of light was too bright to see, Siva showed himself as the Arunachala hill, declaring: “Just as the moon takes its brightness from the sun, so shall other sacred places derive their holiness from Arunachala.” This is the sole location where I have assumed this shape for the benefit of people who seek to worship me and get illumination. Arunachala is OM in its purest form. Every year at Kartigai, I will appear on the pinnacle of this hill as a peace-giving beacon." This alludes not just to Arunachala’s purity, but also to the concept of Advaita and the path of Self-enquiry, both of which are centered on Arunachala.

Sri Bhagavan’s statement, “In the end, everyone must come to Arunachala,” encapsulates this concept.